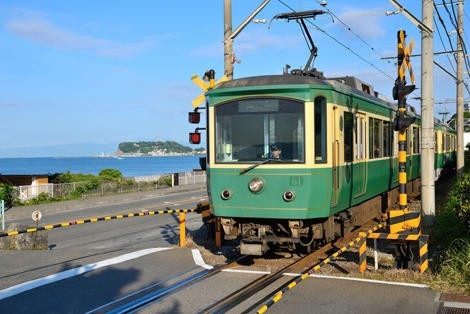 Fujisawa City and particularly Enoshima, are one of the leading tourist spots in Japan. Surrounded by the sea and mountains, this city with abundant nature is close to Tokyo and easily accessible, sometimes it is crowded with many tourists. In this article, we will introduce recommended sightseeing spots in Fujisawa City, including Enoshima.
(information as of April 2017)

Shinbayashi Park is a nature-rich park located down south from Fujisawa Station, just beyond the Sakai River. Surrounded by mountains, this park has Kawana Oike Pond, a bird sanctuary where you can enjoy the wild bird observation, and you can also see the kingfisher, which is designated as a symbol bird in the city of Fujisawa. In addition, an old house from the Edo period, which has been moved to a new location, stands on the banks of Kawana Oike, and you can see the inside of the building.

The Kaigan Park Adventure Field with various types of playground equipment is surrounded by many cherry trees and is crowded with flower viewers during spring.

Tsujido Seaside Park, facing Sagami Bay, is a 19.9-hectare park that is designated as a comprehensive park. It is also selected as one of the 50 best parks in Kanagawa Prefecture.

The attraction of this park is an area called the "Jumbo Pool" which is open from mid-July to early September. The park has six pools of various sizes, including a waterslide going down from a height of 10 meters and a flowing pool that is 270 meters long.

In addition, there is a traffic park where visitors can learn about traffic rules while enjoying the Sky Cycle and go-karts that run on rails 4 meters above the ground, as well as a grass plaza with an area of about 2 hectares.

Junior High School Students / 520 yen
Children (elementary school students and younger) /210 yen
※Admission is free for the person with disabilities and up to one accompanying person.

The Enoshima Aquarium, located right next to the Katase Beach, is an aquarium themed on the Pacific Ocean and Sagami Bay, a treasure trove of marine life. The aquarium's concept is "enjoy learning" and it offers a variety of programs, including a touch pool where visitors can get closer to the creatures that live in Sagami Bay, and a permanent exhibit the "Shinkai 2000", a manned research submersible that conducted deep-sea research in Sagami Bay.


Above all, in the "Sagami Bay Zone" that reproduces the environment of Sagami Bay, there is a large water tank of Sagami Bay, where a flock of about 8,000 sardines swims, and you can enjoy a magnificent and rare view. This is a must-see for anyone visiting the aquarium for the first time.

Enoshima Shrine is known as one of the three major shrines enshrining Benzaiten in Japan. Three goddess sisters are enshrined here, and they are worshipped as the gods of the sea, water, and entertainment. This shrine is also known for its benefits of marriage as well as happiness and treasure and is visited by many couples and women.
The approach to the shrine is lined with candy stores and charming buildings that delight the eyes of worshippers.

Enoshima Sea Candle is an observatory lighthouse built in the Enoshima Samuel Cocking Garden. It was renewed from the old observation lighthouse in 2003 and was given the current nickname in 2010.

The lighthouse is located at 101.5 meters above sea level and offers a panoramic view of the Shonan Sea and, on a clear day, you can see Mt. Fuji, Izu Peninsula, and Miura Peninsula. In addition, during the winter season, the Enoshima Sea Candle is illuminated, making the island looks beautiful at night.